THIS PROGRAM is one that I’ve developed over many years that includes elements from other music approaches such as Dalcroze, Kodaly, and Kindermusik, and methods I’ve learned from other public and private music teachers.  I use singing, repetition, finger plays, signing, instruments and movement to help children experience beat, listening, loud and soft sound, pitch recognition, and gross and fine motor movement as well as creative expression. I believe that the most important element in pre-school music education is that music class be fun. The sharing experience will support children long into their future.

My half hour programs are designed for ages two to seven. Baby and toddler programs are more effective with a larger number of classroom assistants or parents to help with motions. As this is not always possible in day care settings, some portion of the program becomes a performance. This is okay as children are always listening even if occupied in another activity. Each program ends with singing an illustrated song picture book to calm the children down and refocus their attention. I’ve collected these over several years and own about 300. I’ve also written three of my own.

In addition to seasonal themes, I have also focused on such year long programs as colors or the alphabet. This has involved singing four weeks of each color using songs written by Laurie MacGregor (lauriemacgregor.com) and others. Songs or themes are best illustrated with large pictures and attached to the wall during class as young children are mostly visual learners. I’ve also used the alphabet to dovetail with pre-school curriculums. One year I chose a different country each month and taught simple children’s songs in different languages. (Mama Lisa’s World is a wonderful resource for these.) I also learned several from my Japanese, Taiwanese, Mexican and New Zealand relatives. One year I used a geographic theme and sang about different environments each month such as cities, towns, forests, fields, mountains, rivers, oceans, and deserts. It’s all exciting. 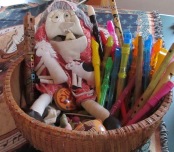 Instruments are fascinating to children. I divide the year into three parts, starting with string instruments in the fall, percussion during the holidays and into the winter, wind in the spring and finish up with keyboards. I’ll demo them or bring in guest artists and have the children try those that can be cleaned. Their favorites are always the ukulele and trombone.

OCTOBER  –  Spiders, Pumpkins/seeds, Harvest, Cats, Halloween.  “Itsy, Bitsy Spider”, “There’s a Spider on the Floor”,  “Spiders and Snakes”, “There’s Something in My Garden”, “Pumpkins, Pumpkins in the Patch”, “Five Little Pumpkins”, “The Cat Came Back”, “What Will You Be? (on Halloween)”, “There was an Old Witch”, “There Was An Old Woman All Skin and Bones”, “Ghost of Tom”, “The Witch is On Her Broomstick”, “Everybody Up and Do Their Halloween Thing”, “Halloween Is Coming Soon”, “Going on a Spooky Walk”, “There’s a Very Strange Cat”, “African Calabash Song”, “Che, Che, Coole”.

NOVEMBER – Chipmunk and Seeds, Patriotic songs, Food and Thanksgiving, and Bears.  “Arnilea, Arnilea, va, va, va.”, “I had a little Nut tree”, “Six Plant Parts”, “I’m a Nut”, “America the Beautiful”, “You’re a Grand Ole Flag”, “Yankee Doodle”, “Here Comes Uncle Jessie”, “And the Band Went Marching Through the Town”, “Huckleberry Gooseberry Raspberry Pie”, “I am Thankful For”, “Over the River and Through the Woods”, “Waltzing With Bears”, “The Bear Went Over the Mountain”, “The Other Day I Met a Bear”, “Bears Eat Berries”, “Going On  a Bear Hunt”.

FEBRUARY – Valentine’s Day and National Black History Month, Chinese New Year with the associated animal.  “If I Were a Gorilla”, “Abadaba Honeymoon”, “The Witch Doctor”, “Magic Penny”, “I Love You a Bushel and a Peck”, “I’m Gonna Wrap Myself in Paper”, “There’s  a Little Wheel a-Turnin’ in My Heart”, “Miss Quiss”, “Mister Lister”, “I’m Bringing Home a Baby Bumblebee”, “A Tisket – A Tasket”, “Abiyoyo” and  African Stick Game.

MAY – Mother’s Day, Gardens, Flowers, Spiders, Snakes, Bugs, Frogs, Animals in Woods, Bears, Patriotic Songs.  “I’m gonna wrap myself in paper”, “If I Were a Gorilla”, “Spiders and Snakes”, “All the Bugs Love Me”,” 5 Green and Speckled Frogs”, “The Bear Went Over the Mountain”,  “I love the flowers”.

A GENERAL LISTING OF MOVEMENT SONGS/GAMES 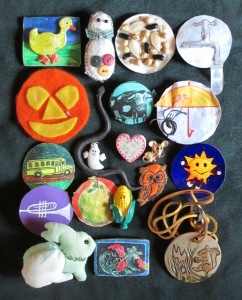 These are sample clues to suggest what is under my magic hat. Two are pins of molded clay, rolled, then cut out with stencils and painted. There are garden seeds stuck down with glue. Most are drawn. One is a boy scout symbol. A few are purchased or are gifts. Children love the guessing game.

A SAMPLE ONE-HALF HOUR PROGRAM WITH THEME AND SONGS

Magic Hat:     Referee’s Whistle is the clue.  A train whistle is under the Magic Hat.

Introduction:  Children enter the room and sit in a semicircle.  The program begins for younger children with a movement song as they sit such as “Wake up hands and wiggle, wiggle, wiggle….”, a name greeting song, or “If you’re happy and you know it”. Older children want to immediately guess what is under the Magic Hat.  Initially, I take attendance singing “Ashley or Peter are you here?”  and they respond with singing“Yes, I am.”

The magic words “Hocus Pocus, Dominocus, Poof” reveal a theme for the day.  The object is sometimes shared as the group sings a first song.  In this case I hand out one instrument to each child that they keep for the entire program. With older children I would talk briefly about wind instruments and how they were first made from natural materials, wood, bamboo or clay. We look at my collection and compare the instruments.  I might introduce Bach and his inclusion of the recorder as a flute in the 1700’s.

Singing:  The song, “The Runaway Train” is a nice introduction to playing wind instruments, even for young children.  They are taught to sing, and then play only when the train blows its whistle.  We try it several times.  They learn that all instruments in an orchestra do not play all the time, but have to wait for their turn. Recorders or train whistles also allow them to keep the rhythmic beat on songs like nursery rhymes that they know well.

If there’s time, other songs on this theme include:

“Paddy Works on the Railway”

“A Peanut sat on a Railroad Track”

“I’ve been Working on the Railroad”

“Down by the Station”

“The Whistle Train’s a Coming”

“I have a dog and his name is Rags” (Whistle)

Down by the Station